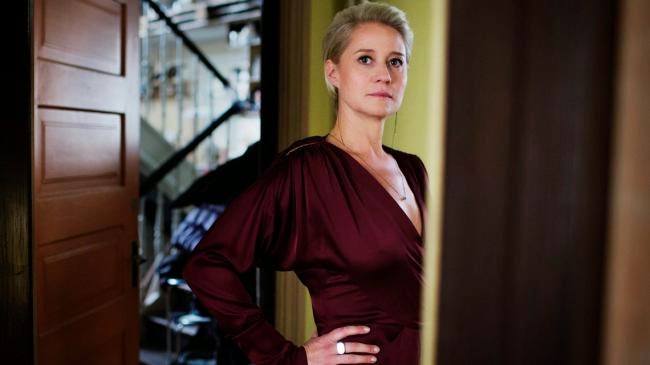 As you know I’m a huge fan of Nordic drama, and my latest passion is a Danish series from the makers of The Killing, called The Legacy (Arvingerne). Unlike The Killing, this is not a detective story,  but an intricate drama of what happens after the sudden death of a celebrated artist, Veronica Gronnegaard. Her legacy is her priceless artworks, but also the chaotic life she led and the (often impulsive) decisions she made during it, which have posthumous reverberations far beyond her immediate family.

Gro, Veronica’s curator daughter, (above) has grand ideas of how best to celebrate her late mother’s legacy – only problem is her siblings all have their own agendas, and ideas about what should be done with Veronica’s considerable fortune.

The plot is delicious with plenty of secrets and lies. Not only do the four siblings have three different fathers, but one of them, Veronica’s ex-husband, who’s also Gro’s failed musician father, lives in a ramshackle shed at the bottom of the garden. What will happen to him now Veronica is no longer there to protect him?

The casts is excellent, I particularly love Gro, who’s played by Trine Dyrholm (she was also good in A Royal Affair) but her elder successful businessman brother, Frederik (Carsten Bjornlund) is also chilling in the portrayal of the eldest son’s cold, calculating grief.

We are on episode five (out of 8), and I’m now totally hooked and cannot wait for the next instalment of my latest Nordic obsession.