Big Sis and I have a tradition; we meet up in early January each year, and have a holiday a deux somewhere a little warmer than London. This year we chose Paris (hence the French above), since neither of us had been there for years.
Then the unthinkable happened, and there was the most horrendous terror attack on the satirical magazine offices of Charlie Hebdo, just days before our planned holiday. I have to admit that we both had some reservations about going to Paris so soon after the attack, but being Finns (and me a Londoner!), we decided to deploy our natural Finnish characteristic, sisu, and packed our bags and stepped onto the Eurostar train at Pancras International station last Thursday.

Little did we know that our hotel, which Travel Team at Guild Travel had booked for us some time ago, was very near where the atrocity took place, and right at Place de la Republique where the demonstration in support of freedom of speech had taken place only few days previously.

Plus, we were told,  the area of Le Marais was reportedly swarming with armed police…

But I think we saw only a handful of army troops or police officers over the four days we stayed in Paris. Parisians were a little more subdued and less jolie than usual, but otherwise the city was its beautiful and stylish self.

Our hotel, Crowne Plaza, was excellently placed at a walking distance of good cafes, bistros and shops. We had a large bedroom on the top floor with two double beds; the staff were extremely friendly and helpful; plus there was a wholly adequate breakfast, which sustained us long into the afternoon. (I find it’s difficult to find a good breakfast in chain hotels these days).

But being where we were, signs of the terror attack were evident everywhere. On our first night in town we walked past Le Monument de la Republique, which was adorned with banners, names and drawings of the tragically killed employees of Charlie Hebdo with slogans of ‘Je Suis Charlie’. Suddenly we felt soberingly close to the terrible events of the previous week. 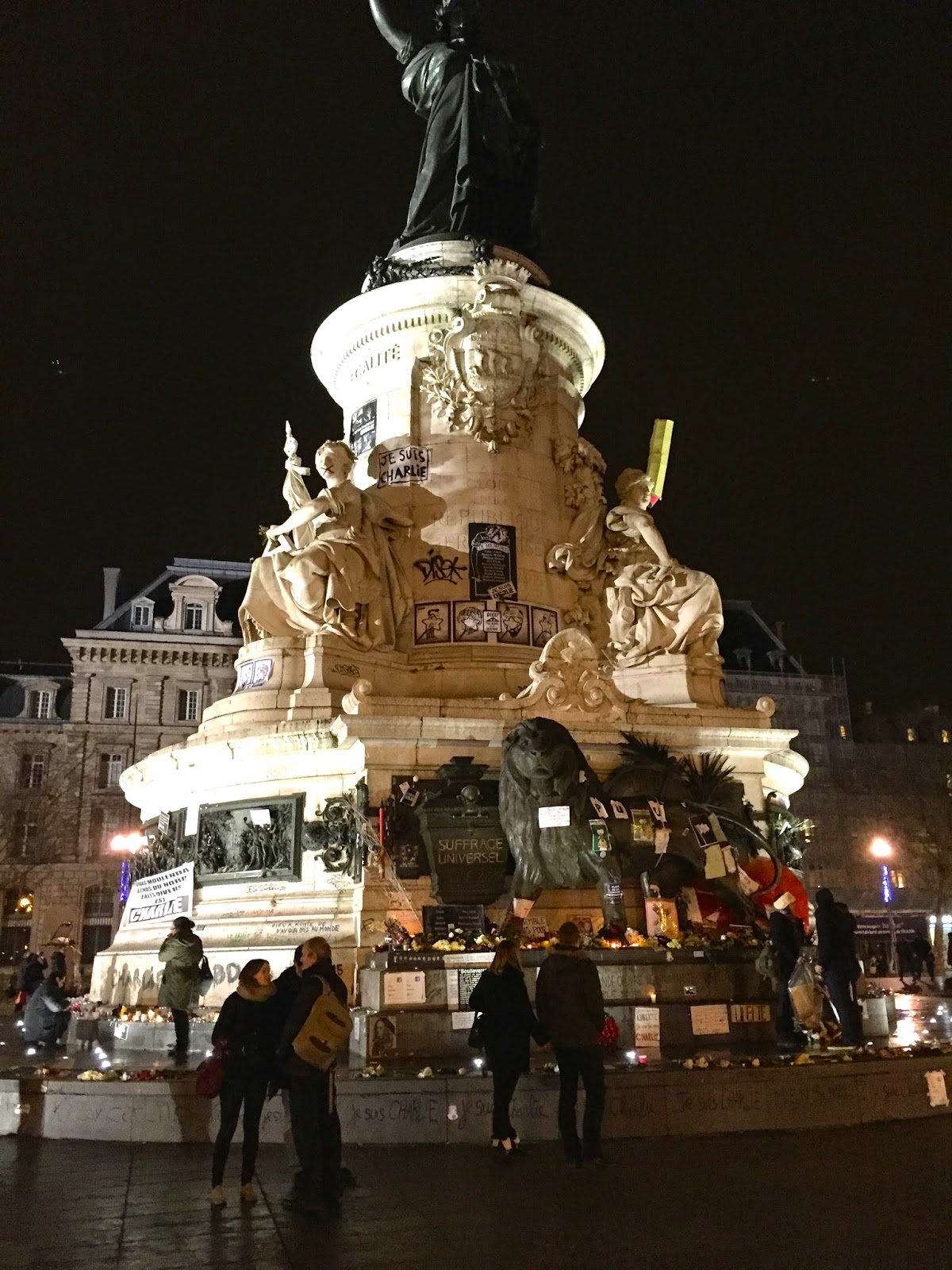 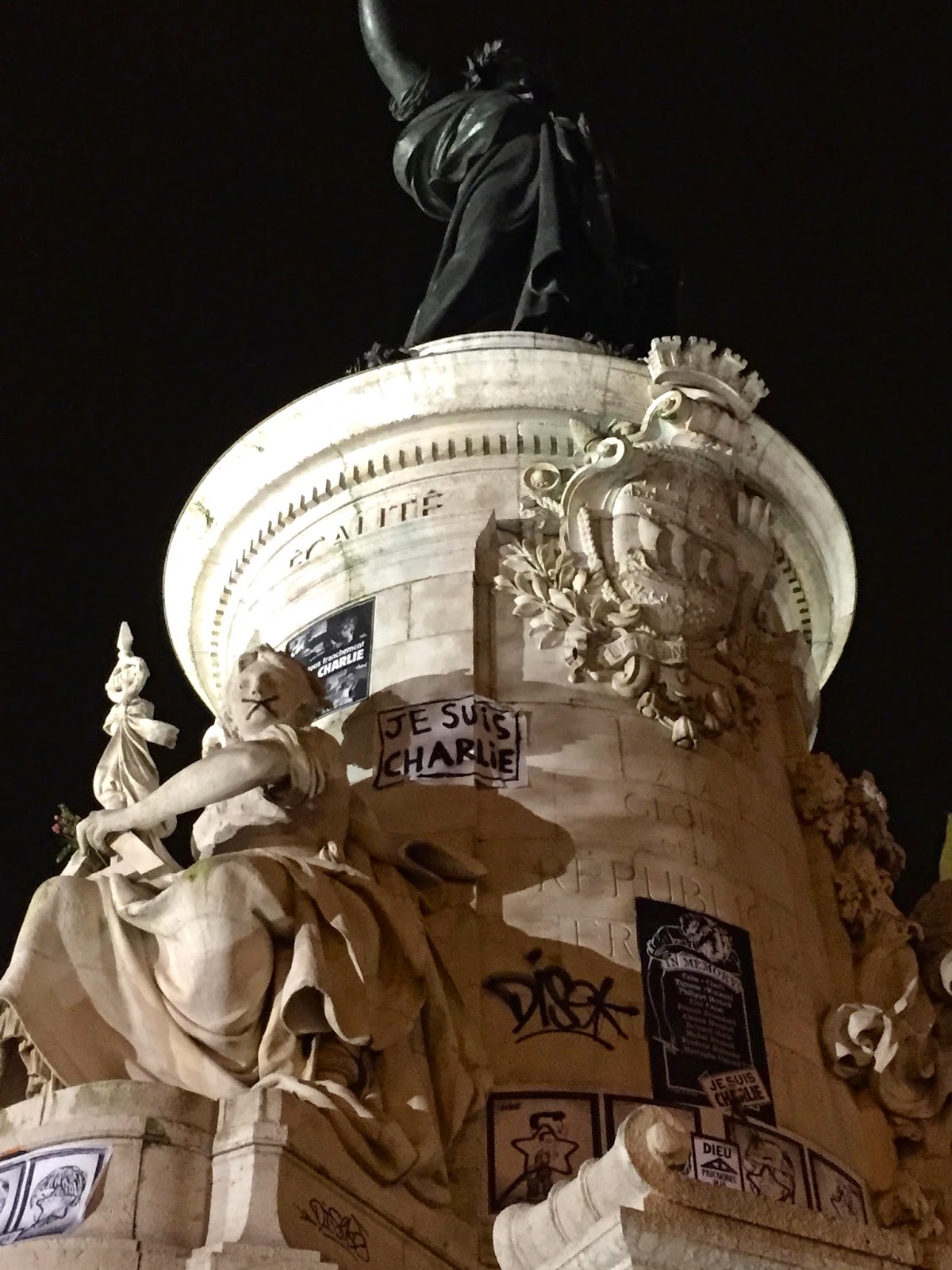 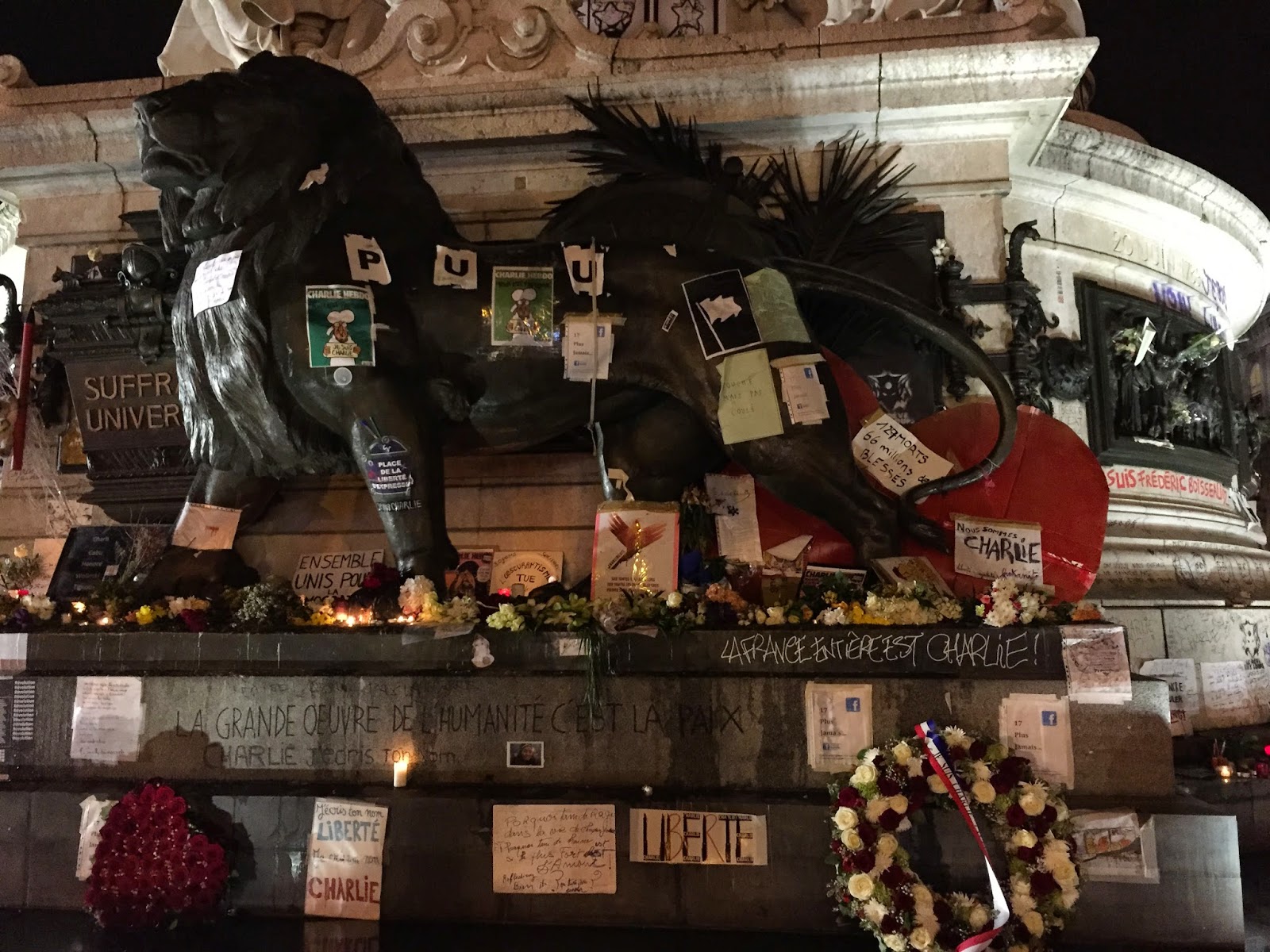 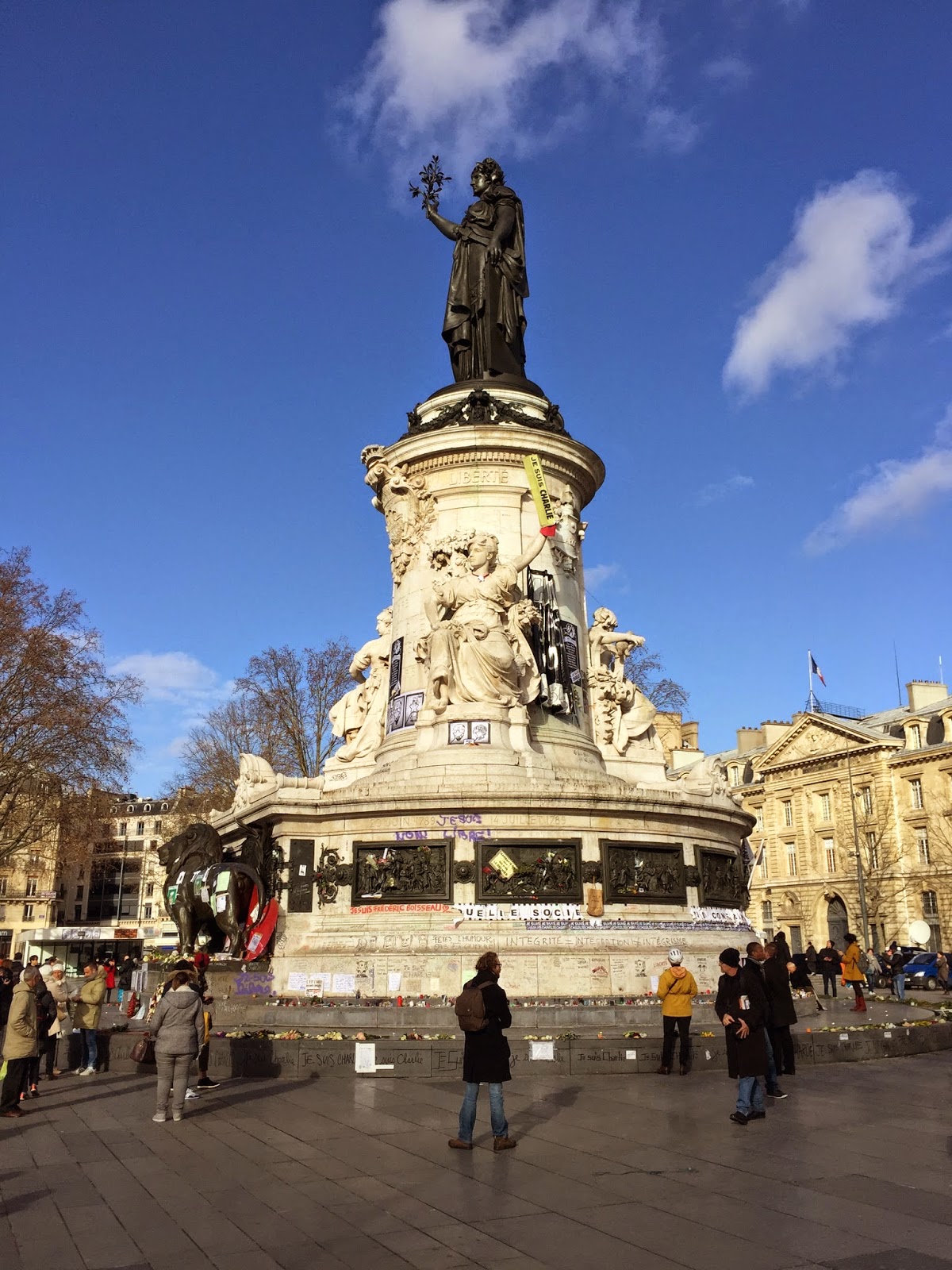 On a whole we had a lovely time in Paris, there was an incredible sale at La Fayette where I very nearly bought a dozen designer bags, but restrained myself and bought just a lovely Marc by Marc Jacobs purse, which had 40% off the retail price. (I’m so proud of myself!) 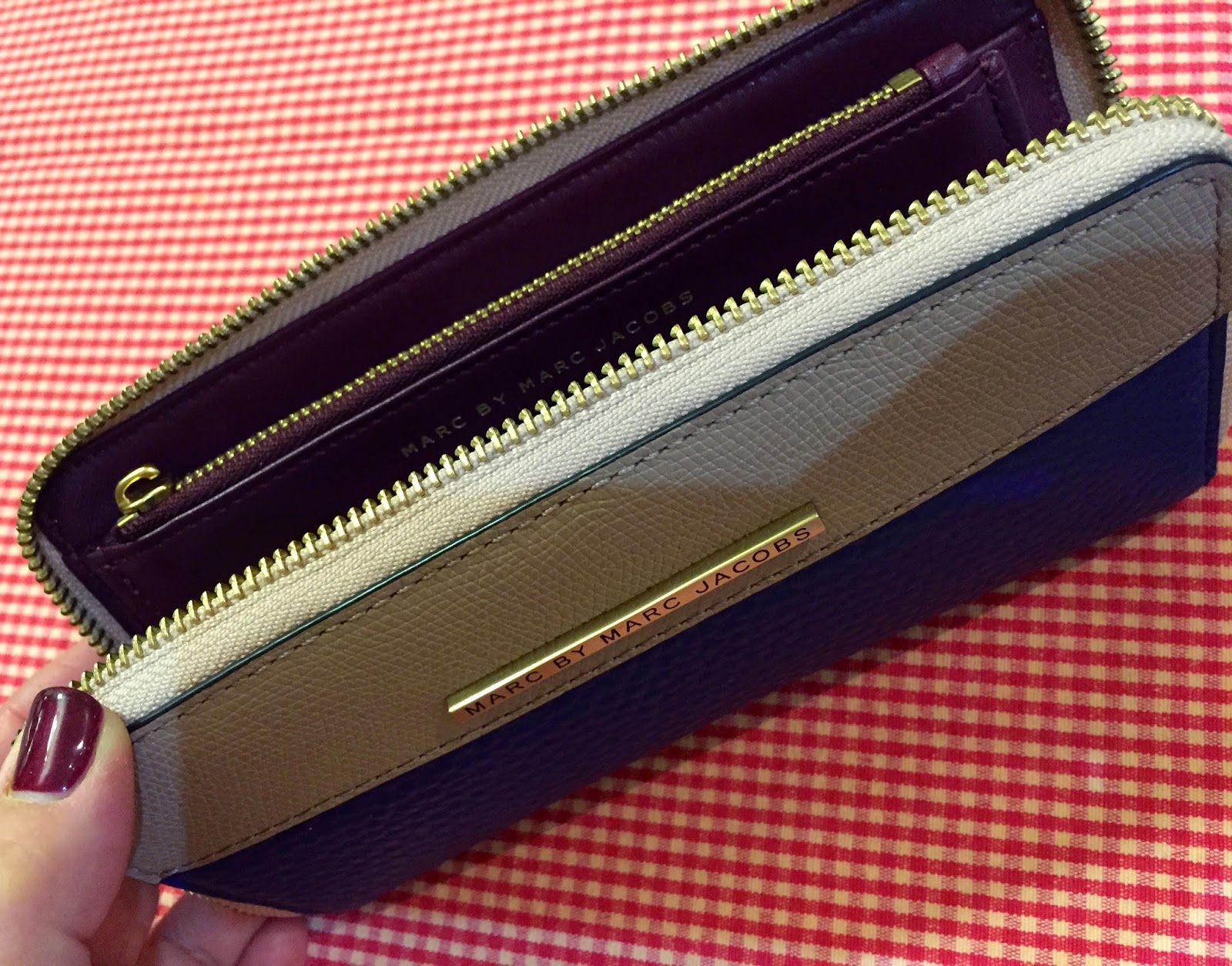 We had great food, great wine, a few too many glasses of champagne, and a lot of laughs, in spite of the sad times this beautiful city is going through.

Lunch in Paris and the frustrations of Eurostar delays