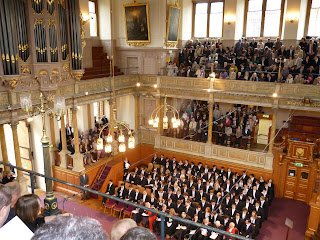 I thought I’d embarrass everybody by crying my eyes out at Son’s Oxford University graduation ceremony, but I managed to control myself.  Whether it was due to the jubilant mood of the crowd, the freezing temperatures as we stood in the shockingly long queue of proud parents and friends, which snaked around the Sheldonian, or the hard wooden seats in the Theatre, or the one and a half hour ceremony, mostly conducted in Latin, I don’t know. It could also have been Husband’s whispered Dog Latin jokes like,  ‘Salitamus Harricus Potterus,’ ‘Glutumus Maximus’ or ‘Bickus Diccus’ ala Private Eye’s That Honorary Degree Citation In Full or Monty Python. I had one wobbly moment when the graduants stood up and clapped the family and friends, and Son looked at us, sitting in the Gods, and smiled. Proud parent doesn’t come anywhere close to describing what I felt at that moment. But that soon passed when a candidate was given a Masters Degree in Studies and Husband whispered, ‘Surely that must include dining rooms and bedrooms too?’

The rest of the day went swimmingly, in spite of the wintry temperatures outside. Luckily the heating in the marquee at Son’s college kept everyone warm during the celebratory lunch. There weren’t any speeches, just a few sensible and encouraging words from The Principal.

And what did I wear, you may ask. Well, the weather completely scuppered my plans. Luckily it didn’t rain much, but the forecast looked so dodgy, I decided to opt for a long sleeved black Agnes B jersey dress and a Jaeger jacket, tights and Miu Miu peep toe shoes. I added the scarf at the last minute and boy was I glad I did. Even though it is just a thin silk thing, it was a birthday present and kept me a little warmer than had I not worn it. Standing in the queue, waiting to go into the ceremony for half an hour, whipped by the occasional freezing gusts of wind, I fantasised about the several warm cashmere wraps, winter coats, smart boots or thicker tights I could have worn.

Going for a conservative look also seemed the right decision….and all items were already in my wardrobe. Fancy that!

What are your characters wearing?