During my extended skiing trip last month I was lucky enough to visit a most fantastic – and unusual – restaurant near the Åre ski resort in Northern Sweden. The chef, Magnus Nilsson, of the remote Fäviken Magasin has become a bit a celebrity. He has been selected as one of the top ten young chefs by Wall Street Journal and is – alongside Albert Adrian from El Bulli – one of the chefs chosen for the Cook It Raw society.

The Fäviken Magasin restaurant is set in a 17th century farm and serves food in one sitting, to a menu decided by the chef. All the ingredients are either grown or reared at the farm, or in the waters nearby (we had langustines from Norway). The only ingredients they buy from further afield are salt and pepper, and the dishes they serve strictly follow the seasons (A Cook It Raw principle). This is no mean feat in a place where snow covers the landscape for half of the year and the growing season is three or four months at its best. On the other hand you have the most fantastic wild ingredients: lingonberries, various mushrooms, game. Traditional and newly invented methods are used in preserving the berries, herbs, root vegetables and meat and fish. The chef also likes to use of all an animal – in a very similar way to St John’s Bread & Wine (I wrote about that restaurant here).

When we arrived, it was snowing and the farmhouse looked welcoming against the dark blue night. 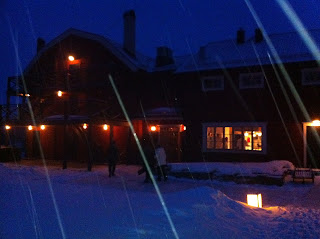 The path to the front door was lit by fires. 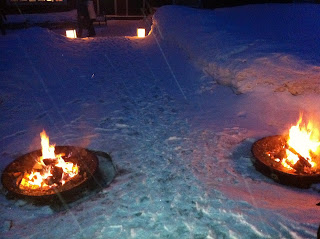 In the restaurant which sits only 12 people, there are no menus. Instead the staff tell you what you are about to eat just after they’ve served it. There are eight courses (not counting a few amuse de bouche’s), and the identity of the wine is concealed for the customers to guess the grape and region, etc. I absolutely hate it when the host at a dinner party decides to play this game. It’s usually done just to massage his or her middle-class ego, ‘I know so much more about wine than you’. I’ve never before come across the same done in a commercially run restaurant. But, hey, while in Sweden, you must do what the Swedes do.

The guessing game aside, the food and the incognito wine at Fäviken is indescribably delicious. The tastes are so pure that I found myself thinking about the dishes I ate there for days – even weeks – afterwards.

Plus the staff at Fäviken Magasin could not be friendlier. They take such pride in the unusual dishes that the service can sometimes come across as pure theatre. But then isn’t that what a really good dining experience is supposed to be – a very well executed performance?

These were some of the dishes we enjoyed.

We all felt very privileged to have been able to enjoy this fantastic restaurant. Although it is not cheap by any means, if you ever find yourself in the Swedish ski resort, you must try the place. Your taste buds will never again accept over-fussy, over-seasoned, or out of season food.

I’m just off to the Heath to forage for some wild leaves….or perhaps not.

Fäviken launch at The Swedish Ambassador’s Residence in London