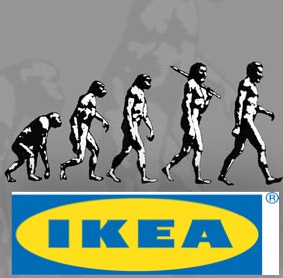 The new academic year always seems to herald another trip to IKEA to get bright and beautiful bits of pieces for daughter’s digs at university. But IKEA and I have a history going much further back than that.

First time ever I visited IKEA was in the round, Guggenheim style, store in Stockholm in 1973. My parents had newly separated and together with my mother and older sister we headed up to IKEA on bus and tunnelbana (tube -you can guess how this is going to end?) in order to look at things we could furnish our new flat with. We came out of the store having purchased two armchairs, complete with brown and orange cushions. Plus some other stuff we couldn’t do without – lamp shades, table lamps (in orange and red), rugs (brown and beige stripe) and various bits of bed linen. It was all so cheap and chic (we thought) that we just couldn’t resist.

As you may have imagined, the bus and tunnelbana journey home was interesting.

The next time I went to IKEA it was a good twenty years later when, living in Wiltshire, one Sunday morning I announced that we would drive the 70 or so miles up to Birmingham to the newly opened IKEA. The Englishman had no say in the matter – I was obviously still slightly deranged following a second pregnancy. I announced I was homesick and needed to be amongst Scandinavian things. (The presence of an IKEA was still quite a novelty here in Britain). Besides the drive would only take us three or so hours each way. It was circa 1992 and our daughter was a toddler and our son was a wise five-year-old.

That time we bought the children some beautiful pine bunk beds. It was only when we headed for the car park that the wise oldest child asked, ‘Is the bed going to fit into the car, daddy?’ We looked at each other over the top of the five-year-old’s head, and assured him there wasn’t going to be a problem. The beds just about did fit, but daughter had to be squeezed in her car seat at the front, and son and I had to share a back seat (and seat belt) in our Ford Mondeo. This arrangement, as he kept telling me frequently during the three hour drive home, was ‘against the law’. We became convinced our son would become an Insurance Actuary when he grew up.

The third time that an IKEA visit will never be forgotten in our household was when, in 1995, on our way home after visiting our London friends we thought a trip to a furniture store would be the best hangover cure, or rather a plateful of IKEA meatballs and chips would be.

At Brent Cross we headed straight for the restaurant and after our bellies were full we went to look for the children who by then were 7 (son) and 4 (daughter). They’d been allowed to go to the nearby play area in the cafeteria. But when we looked, we could only see our son there. ‘Where’s your sister?’ we demanded. Poor son panicked – our daughter had left the table after him, so he had no idea where she was.

This is how it happens, I thought. We’re in London where children, particularly little girls, disappear all the time. Awful, unimaginable things are done to them by cruel, sick people. Cold fear overtook me and with an numbness I haven’t felt since, I rushed to talk to the nearest security man, while husband – on a hunch – made his way down to the ground floor. The store was filling up – it was a Sunday in late November, and the early Christmas shoppers were in full force.

We found out later that our daughter, when being told she could go to the play area, decided to make her way down to the ‘sea of balls’ which she’d spotted on arrival but hadn’t been allowed to go into. Luckily she made it there, and the staff realised she wasn’t with a parent, and alerted store security. I’m sure both the Englishman and I developed a few wrinkles and grey hairs during the fifteen or so minutes (which felt like years) we lost our daughter at IKEA.

Do you have an IKEA story?

A true story: me as mission control